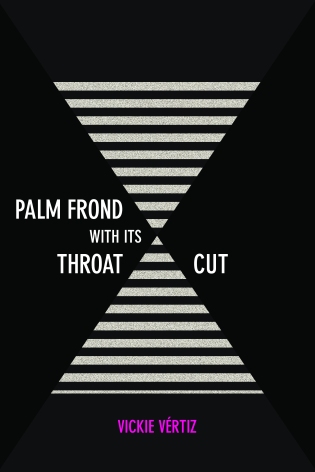 Winner of the 2018 PEN America Literary Award for Poetry.

I love you like you are the only one. Between smog-soaked trees, city of vaseline side-steps, you tower over. A clean-shaved head, as close to tough as you will ever be. Behind me, the Mexican flag: colossal. Beneath: full metros shake, pyramids settle.
I am no virgin.

I’m the Aztec God of War.

Palm Frond With Its Throat Cut leaps into fresh literary territory, presenting colonization, privilege, and displacement as intimate, everyday occurrences—in the intimate spaces between sisters, lovers, and neighborhoods. Her poetic experimentation, inspired by modern art and immigrant struggles triumphs in the Latinx community, creates narratives that probe the concerns of the working class and queer people of color.

Vértiz’s poems ask us to see Los Angeles—and all cities like it—as they have always been: an America of code-switching and reinvention that replaces erasure with lyric and fight.

Praise for the book:

Indicating array and incision, Palm Frond With Its Throat Cut, where the ones who are first, and last, come first. Their verbs survive, enduring violent spacing, constantly displacing song in having vividly been made to come, in form, as questions emphatically unenclosed, in love in brokenness, in the language of all languages, lit up as Los Angeles. On the way home, but always only on the way, Vickie Vértiz runs la vida down.

The oldest child of an immigrant Mexican family, Vickie Vértiz was born and raised in Bell Gardens, a city in southeast Los Angeles County. With over 25 years of experience in social justice, writing, and education, Vértiz is an alumna of the Woodrow Wilson and Mellon Minority Undergraduate Fellowships. She teaches creative writing, writing for Chicanx Studies, writing for Gender Studies, summer bridge writing for EOP students, and Composition at the University of California, Santa Barbara.